​The Kingfishers Bridge reserve was originally conceived and created because of the abundance of birds passing through the River Cam corridor.  The reserve has proven to be a vital resting and breeding site for increasing numbers and species of birds and many other species through the creation of different varieties of habitat.

Cetti's Warbler
​Mud edges kept clear by livestock or mechanical means provide the primary food source for our many wader species; a range of water levels and pools are breeding grounds for midges and mosquitoes, which in turn support large numbers of warblers and tits.


​Whilst a simple concept, maintaining clear shores and open pools -  without the natural clearance caused by flooding waterways - requires annual or, in some cases, even more frequent management.

Numbers of Bearded Tits, Reed, Sedge, Cetti's (left) and Grasshopper warblers continue to rise every year.  The number of Reed Warblers in our reed beds has increased to over 60 breeding pairs.  Many of these birds also migrate to Africa for the winter.
​Sward management is also key to creating a range of habitats for the birds that use Kingfishers Bridge.  We use a mix of management styles. Livestock grazing creates a patchwork of short lawns and taller tussock vegetation.  Mechanical cutting and collection is used to clear inedible vegetation and to impoverish others.  This benefits birds by providing feeding, displaying, breeding and roosting microhabitats within their primary habitat.  Lapwings like to nest wherever there are good open views enabling them to spot potential predators. Both dry ground with short vegetation, as is found on the limestone grassland, and open wetter areas, adjacent to the pools on the meadows, are used by them for nesting. Once the young hatch they are usually taken to the wet areas where the feeding is good and the vegetation is starting to grow, providing better areas for the young to hide in.
​​Kingfishers and Sand Martins use the specially created cliffs for nesting. The Kingfishers thrive on the abundant food supply and usually have two broods in each year. The Sand Martins are long distance migrants spending the winter in Africa, just south of the Sahara.  One of the first migrants to arrive back in the Spring, they nest in the specially created holes in the limestone cliffs. 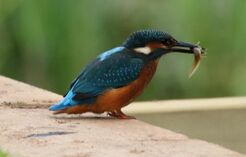 Kingfisher
​Bitterns favour wet reed beds with good fish populations.  The creation of this specialist reed bed habitat, of which 30 acres was generated from seed and then stocked with locally occurring native fish, has become a particular expertise of the reserve.  The young fish thrive in the reed bed and ditches where specially constructed ‘reefs’ of sunken willow provide fish refuges away from some predators, such as cormorants. As a result of such habitat creation, the first young Bittern was seen at Kingfishers Bridge in 2003; the first to be reared in an artificially created reed-bed in the UK.

Marsh Harriers also regularly nest in wet reed-beds but these birds wander more widely in search of prey. The male often brings food to the female when they are breeding and passes the food in mid-air giving those watching a view of an impressive aerial display.